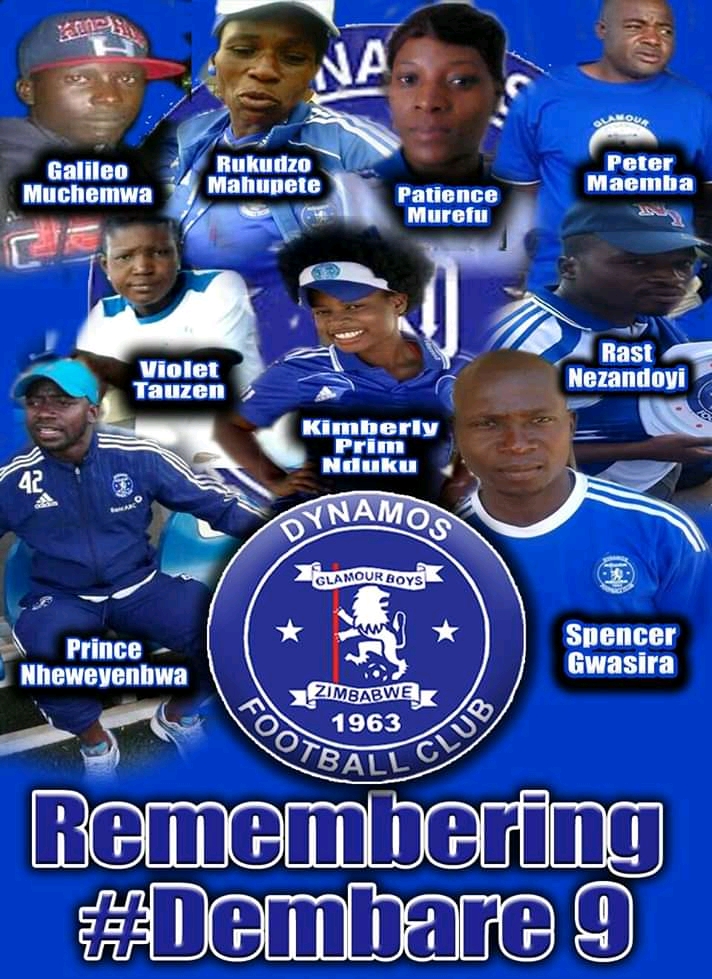 JUNE 11 will be forever be enshrined in Dynamos’ modern history. It is a day the club lost nine of their fans in a road accident in Battlefields as they travelled to watch their team in a league encounter against Chapungu at Ascot in 2016.

Seven of the fans died on the spot while two succumbed to injuries sustained in that accident that also left others disabled.

And in a ‘befitting’ send-off DeMbare went on to win the match 2-1.

In an interview, Dynamos spokesperson Tinashe Farawo said the day will forever be remembered with the honour it deserves.

“The fans remain an important constituency to us and when such tragic incidents happen as a club we continue remembering them. They were traveling to rally behind their beloved team, they are our ‘martyrs’.

“Even after all these years, we continue sending comfort to the affected families. As the Dynamos family we are also aware that Supporters Associations are also remembering them. It is unfortunate that there is no action presently, it was going to be something good to remember them with that ambience at the stadium, ” said Farawo.

The club’s Harare Chapter Supporters Association secretary-general Shungu Kamukapa said, as fans, they are still finding it hard to cope with the reality even after four years.

“The loss of a loved one is something that one can never cope with especially under tragic circumstances. Death, in itself, is difficult to digest because most of the times it leaves a void that can prove difficult to fill.

“This has been the case over the last four years within the Dynamos supporters family. Of course celebrated names like Taribo West come to mind but every loss has left its mark on us, more disheartening is the fact that these nine perished in the line of duty.

“Dynamos fans are known for being passionate about their club and it is testimony that these members were part of the vocal Vietnam Stand , a place where you find some the most loyal and passionate of fans who will sing and cheer throughout 90 minutes even when the chips are down. So you can imagine the emotions doing the rounds each time fans travel away.

“The journey always carries an extra emotional attachment as we feel that despite our many numbers there are some fellows who should have been here cheering their favourite blue & white army,” said Kamukapa.

Kamukapa said it is unfortunate that they will not remember the deceased at the stadium due to Covid-19 outbreak.

Instead, in a special honour to the nine, they will donate to their families.

“The intention is to commemorate our dedicated sons and daughters in a manner befitting their contribution to the club. Plans have been lined out to hand over donations to the respective nine families as a token of goodwill as most of the departed members were breadwinners, the wish is that in cases where some left children we aim to be able to pay for their tuition or better off give them employment or something to keep the families growing.

“The obligation to be our brothers’ keepers remains the focal point of the supporters. Every year a reception is held in the month of June in their honour but given current lockdown restrictions, we have had to adjust accordingly.

“This year we intend to distribute hampers to the families of the DeMbare 9, we have also had to call out for help to raise funds to supplement the gestures earmarked.

“Because of the economic hardships prevailing, the clarion call is being made to the outside world for every donation or hand extended is mostly welcomed and greatly appreciated. Besides the #Dembare9, we also have some of our members who survived the accident but are now permanently disabled..

“Our wish is if we can be of some assistance to them so that they can be able to sustain themselves and have something they can generate some income from. We also take the opportunity to remember another Dynamos fan Chipo Nyikayaramba who died in April last year on her way to watch our match against Chicken Inn,” he said.

Kamukapa also said they will do something when action resumes to show the football community the importance of the twelfth man.

“The 12th man, the fans stand out to be an integral member of every team who have the priceless role of cheering their team giving it an advantage over their rival on the day. The perfect commemoration indeed would have been before a huge crowd singing their praises and honouring their heroic efforts over the years.

“The hope, however, is when it is all clear to go back out there we honour them in song and dance at the stadium. And as the country continues fighting the coronavirus pandemic, DeMbare fans have also added their voice urging football lovers to comply with the regulations if they want to see action resuming soon.

“Coronavirus has put football fans in a spot that we are not accustomed to, but it is imperative to note that without life there is no football to be talked about. So until a solution is formulated and a vaccine is discovered we just have to comply with the existing safety guidelines and accept that this too shall pass.

“We take this opportunity to thank the frontline workers who have been working tirelessly in the fight against the dreadful disease.”