The late prominent and outspoken Dynamos and Warriors fan Freddy ‘Pasuwa’ Mugadza was a larger-than-life character who never hid his penchant for violence, all for the love of the Glamour Boys.

Mugadza, who was based in the United States Of America, succumbed to heart attack on Sunday.

Mugadza was popularly known for his violent nature especially during Dembare matches. In one of the altercations he sustained an injury to his head that needed a bandage which became his trademark in Vietnam Stand. 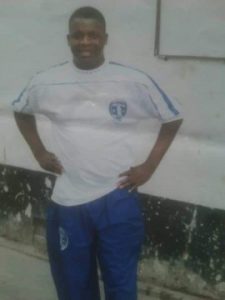 He christened himself “Pasuwa” after his undying love for then Dembare midfielder Callistus Pasuwa.

He left Zimbabwe for the United Kingdom at the turn of the millenium where from where he kept in touch with the goings-on at his beloved Dynamos. He never hid his aspirations of one day coming back to take over the administration of the club.

His other favourite team, besides of course The Warriors, was the Italy national team hence some of his colleagues called him “The Italian”.

Mugadza was always vocal about the lack of professionalism at Dynamos and vowed to correct all anomalies once he took over power at The Boys In Blue.

He founded the Facebook page Freddy Pasuwa Mugadza Football News where he assumed the nickname “Chairman” where every member was addressed as “Legend And Director”.

Reacting to the news, another prominent Warriors and Dynamos fan Chris “Romario” Musekiwa said that Mugadza’s death was shocking.

“It’s really unbelievable that my brother and legend Chairman Freddy Pasuwa Mugadza is no more. He was a larger than life character whom I befriended during the Dynamos successful Champions League campaign in 1998.”

“He was a fearless, no-nonsense and die-hard Dynamos cheerleader who was the founding King of Vietnam Stand. It is sad that Mugadza has passed on at such a time he had pledged to buy tombstones for departed legendary fans, the great Stanford “Taribo West” Nhau and the Chirasha Brothers.”

“Shocked to hear about the passing on of Freddy Pasuwa Mugadza. Rest in peace” tweeted Mucherahowa.

Rival Caps Utd fans through their Twitter page sent in their condolences:

On behalf of Caps Utd supporters, we express our deepest condolences to the Mugadza Family and the entire Zimbabwe football family on the sudden death of prominent Dynamos fan “Chairman” Freddy Pasuwa Mugadza. RIP Chairman.”
Funeral arrangements will be announced in due course.