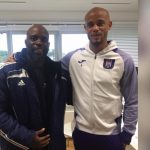 DYNAMOS Football Club coach Tonderai Ndiraya today visited the training base of one of the biggest clubs in Belgium RSC Anderlecht as he continues his attachment in the European country.

He had the priviledge to meet up with the club’s technical officials prominent among them former Manchester City defender Vincent Kompany who is now Player/Coach at the club (picture).

It has been a hectic programme for Ndiraya as on Saturday night he watched his host club KV Mechelen thrash Waasland-Beveren 4-0 in a league match at the AFAS Stadium.

Yesterday he was hosted by another top-flight club Genk and watched their full training.

Today and tomorrow he is attached at Anderlecht before he comes back to his main hosts KV Mechelen for the rest of the week.

On Friday he will travel with Mechelen to watch them in action away to Sint Truden in a league match.

Ndiraya is on a two-week attachment in the European country at the invitation of KV Mechelen at the facilitation of Belgian consultants Gino Laureyssen and Valerie Billen.

However it is today’s one-on-one with luminaries like Kompany that should equip Ndiraya with more knowledge about modern football trends and techniques and hold him in good stead for his dual roles with Dynamos and the Young Warriors back home.