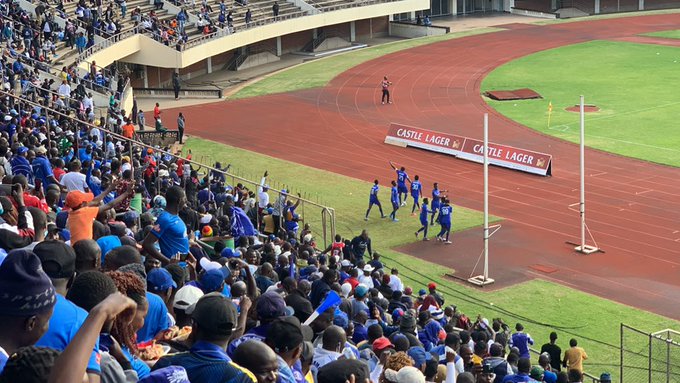 DYNAMOS FOOTBALL CLUB chose the grand stage to finally explode just as their fans have been demanding to put rivals Caps Utd to the sword in a lively Harare Derby played in cool temperatures at the National Sports Stadium this afternoon.

Discontent had been simmering within the Glamour Boys family after the three frustrating matches against Highlanders and Bulawayo City and Herentals punctuated by what fans called “boring football”.

But everything finally fell into place this afternoon as Dembare destroyed rivals Caps Utd to send their maltitudes of fans into delirium.

It had looked ominous for the Glamour Boys as they lost utility man Shadreck Nyahwa to injury just before the start of the match. However, Dynamos coach Tonderai Ndiraya rang several changes to his team as he handed winger Issa Sadiki and Junior Makunike rare starts, while talented left-back Brendon Mpofu returned from injury.

Sadiki put up a man of the match performance as he dazzled for the Harare giants, roasting wingback Valentine Musarurwa much of the afternoon, bringing to the fore a dribbling artistry last seen in local football a long time ago.

Fittingly, Sadiki opened the scoring for Dynamos in the 44th minute, when he latched on to a brilliant angled pass from Evans Katema and closing in on the opposition goal area.

Sadiki had the presence of mind to gain a few more yards and coming face to face with keeper Tatenda Munditi before expertly placing his shot just beyond the reach of the goalie and into the bottom corner of the net.

The relief of going ahead in the derby was evident as Dembare players celebrated with the Zora Butter dance bringing back fond memories to their fans on the Eastern side of the stadium.

Dynamos were to dominate proceedings from there and poor shooting and over elaborateness prevented them from surging further ahead.

Seven minutes into the second half, Dynamos increased their lead when Ralph Kawondera side-footed a cheeky shot past the keeper from a Katema pass, to kill off the match as a contest.

To their credit, Caps Utd did not drop their heads as they kept possession well and had good build-ups which could have been rewarded with a goal but for the resolute Dembare defence.

The best chance for Caps Utd came in the 65th minute when a delicate cross from the far left looped onto an unattended William Manondo who headed over the bar with no challenge from the Boys In blue and to the amazement of many.

Dynamos put the icing on the cake with a minute to go in regulation time when enterprising defender Frank Makarati rose highest in the box to plant his header home from a corner kick by Sadiki.

The match marked the first time that Caps midfielder Devon Chafa had lost a Harare Derby match in his career, though he himself had a decent performance in the middle of the park.

Dynamos coach Tonderai Ndiraya was a much relieved man after the match coming from a tumultuous fortnight in which he was suspended and reinstated.

With the three points, Dynamos have risen back to second place after being dislodged by champions FC Platinum yesterday.

In other matches played today, Chicken Inn held on to top spot when they came away from the Lowveld with a precious 1-nil victory over Triangle, while Manica Diamonds won the Mutare derby 1-nil over Tenax.

Highlanders welcomed their new coach with a 1-nil victory over Harare City as WhaWha shocked Ngezi Platinum by the same scoreline.