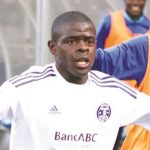 DYNAMOS Chairman Isaiah Mupfurutsa has dismissed social media rumours that they are neglecting utility player Godknows Murwira saying instead they are looking for the best doctor to perform surgery on the player.

Murwira is on loan at Dembare from his parent club FC Platinum.

He has a recurring knee injury that ruled him out of the last few games of last season.

However, the Glamour Boys have been paying for Murwira’s consultation fees and the scans too.

Social media has been awash with claims that Dembare were dithering on paying for Murwira’s medical expenses because “he would be reverting to his parent club soon”.

Murwira was supposed to undergo surgery early last month but failed with reports suggesting DeMbare failed to meet the expenses.

Mupfurutsa said the claims were false as they have the funds to make sure he gets the best doctor.

“Yes the surgery did not go on as planned. But it was not because we didn’t have the resources, we had a lot to consider.

“We want things to be properly done and we have procedures we are following,” said Mupfurutsa.

Mupfurutsa said they are doing their best to make sure the utility player gets back to full fitness as soon as possible.

“Murwira is our valued asset. We cannot neglect him now. He is our player and we would want to put our money to use.

“He has been a vital cog and we really need his services. We are trying our very best to make sure he gets the best treatment.

“Jaure’s case required a lot more than Murwira’s case. If we did it to Jaure why can’t we also take care of Murwira. We have the capacity to give our players the best when it comes to health issues,” he added.

Mupfurutsa could not shed light on when Murwira’s loan period will lapse only saying they will decide on the future once they hear from the doctor who has been attending to him.

He also said the current lockdown has not done them any favours.

“We are all victims of this Coronavirus pandemic and everything is on hold now.

“We are worried that it might affect Murwira but as you all know the situation is beyond our control.

“We will wait for the situation to normalise and start from there,” he said.