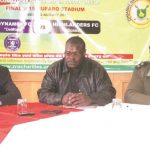 Dynamos Secretary-General, Webster Marechera, says Dynamos will this coming season roll out a commercial plan which will see the team make strides towards commercialization.

“We are Dynamos and we have to take a leading role in everything. In as much as we want to win trophies, we also want to make profits,” said Marechera.

“We didn’t do well last year but this time around we hope to regain our place.

“Obviously, as a club, we also need to make money. We need to partner with corporates, we need to embark on some ventures to make sure that the club makes profit.

“But it is a gradual process. We have made a lot in terms of effort to ensure we succeed on both fronts in 2020.”

Dynamos, the biggest and most successful club in Zimbabwe has perrenially operated like a tuckshop with no commercial plan or audited accounts among othet things. The club has failed to purchase a training ground, a bus of its own or a decent office of its own.

The club has failed to live up to its billing through an archaic leadership that often employs stone-age tactics.

This has seen Dembare falling way behind other continental heavyweights like Al-Ahly, Kaizer Chiefs, ASEC Mimosas, Esperance and so on.

It remains to be seen if this latest initiative will come to fruition, or it will die a natural death, like many other initiatives before