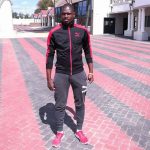 Dynamos new recruit Byron Madzokere’s allegedly misled South Africa’s First Division side Moroka Swallows into preparing a contract for him, while at the same time signing a contract with Dembare last week.

Madzokere put pen to paper for Dynamos without informing his Zimbabwean agent, Butler Masango, who had negotiated the deal to sign for Swallows.The defender was under the care of Masango in South Africa for the better part of the festive season when he impressed the Moroka Swallows technical bench.

Swallows wanted to sign the defender but he was asked to clear with Yadah Stars first. He then left South Africa saying he wanted to get his clearance from Yadah only for him to go on and join Dynamos.

A disappointed Masango said Madzokere’s attitude could jeopardise his relations with Swallows.
“I was surprised to learn through the media that Byron had joined Dynamos. I am still in a state of shock,” said Masango.

“Moroka Swallows approached me to look for a good defender. I recommended Madzokere and I brought him to South Africa for a trial stint. Inside two days, the technical bench had been impressed by him.”

“He has the right stature, work ethic and is good on the ball. That is what they were looking for and they wanted to sign him immediately. However, he had to go back to Zimbabwe and get his clearance with his team, Yadah Stars.

“Before he went back to Zimbabwe, Madzokere had agreed personal terms with Swallows and while he was in Zimbabwe, the team was finalising his contract. To my surprise, I heard he has since joined Dynamos. He didn’t even call me to inform me of his decision or change of it.”

“It puts me in bad standing, my reputation as an intermediary, especially for Zimbabwean players, is at stake. I don’t even know what to tell Swallows at the moment. I think it is very bad for a player to act in such a manner he acted.”

Masango also revealed Madzokere had earlier failed to make the grade at another South African side, Free State Stars.

“He came here in December and I took him to my place before I arranged with Free State Stars to have a look at him as they wanted a centre-back. He went to Free State and stayed in a hotel for two weeks but the coach said he wasn’t impressed with him.”

“He came back to me and then I took him to Moroka Swallows and after two days their coach wanted to sign him. I was driving him almost 45km to Swallows for training and we agreed he must go and get his clearance from Yadah.”

“He went back to Zimbabwe and we were communicating and then, all of a sudden, I saw on Facebook that he signed for Dynamos. The person who stayed in my house, ate my food, that’s the thank you he gave me . . . His attitude is now making me to think twice about helping these Zimbabwean players.’’

Madzokere’s relationship with Yadah also ended under a cloud with the club questioning his professionalism. Masango suspects that is the reason why the player did not go to Yadah for clearance.