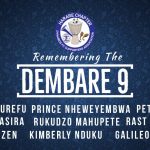 Saturday 11 June 2016
SEVEN Dynamos Football Club supporters perished on the spot and 16 were seriously injured when an Iveco Sprinter they were travelling in burst a rear tyre, veered off the road and rolled three times in Battlefields on the Harare-Bulawayo Highway early this morning.

They were travelling to Gweru where Dynamos played Chapungu at Ascot Stadium.

Twelve of the injured were taken to Kwekwe General Hospital and four to Kadoma Hospital.

“We can confirm that seven people died on the spot and the accident occurred at the 173km peg between Kadoma and Kwekwe near ZRP Battlefields.

“As police we are concerned with the frequency of these accidents and we are urging motorists to check the expiry dates of their tyres. Motorists should also desist from using second-hand tyres; it gets worse if the vehicle is travelling a long distance.”

Sport and Recreation Minister Makhosini Hlongwane sent his condolences to the bereaved families.

“The Minister of Sport and Recreation is shocked by the loss of lives of Dynamos supporters who perished (yesterday) at Battlefields on their way to the Dynamos-Chapungu match in Gweru. The minister conveys profound sympathies to the families for the loss and condolences with them during this very difficult time,” he said in a statement.

“We are in mourning, our hearts are bleeding. Fans are the ones who make football beautiful and losing some of them in this manner is really painful.

‘‘Our prayers are with the bereaved families and we will see how we can assist them,” he said.

Dynamos president Mr Kenias Mubaiwa, who rushed to the scene of the accident, said: “This is very painful, we are pained. This is a major setback not only to the Dynamos family but the national football family as a whole.

“As Dynamos we will assist the bereaved families as well as support those injured.”

“We are shocked by the deaths and as a league we feel pained that people who were travelling to watch a soccer match met their fate in such a painful manner. Our deepest thoughts are with the bereaved families and we pray that they find strength in the Lord.

“We are appealing to all football fans to unite in this sad hour and paid tribute to these Dynamos supporters,” said Mr Dube.

“This is a very sad day for football, what is worse is that the accident happened at a time the fans are in a celebratory mood following the Warriors’ qualification for the Africa Cup of Nations finals last Sunday.

“As the Zimbabwe National Soccer Supporters, we are calling on the football family to unite in mourning these gallant Dynamos supporters.

“This is not a Dynamos funeral, it’s a national football disaster and we are urging the Premier Soccer League and the National Football Association of Zimbabwe to assist the bereaved families.”