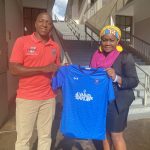 DYNAMOS Football Club have honoured former club captain and one of its most loyal sons Desmond Maringwa with a replica club jersey in Harare today.

Maringwa, who is now the Football Union Of Zimbabwe (FUZ) President, received the jersey from Yvonne Mangunda, the Marketing And Communications Manager Of Dynamos FC.

He tweeted his gratitude “Thank You @OfficialDynamos for a nice surprise and an early Christmas present, I now own an official Dynamos FC jersey. I am humbled”

“Gazza” as he is widely known served the Glamour Boys for more than 12 years and was part of the trailblazing Dembare squad that reached the final of the CAF Champions League in 1998.

Maringwa has the distinction of having played for a single team all his professional career.

According to Mangunda, the replicas go on sale tomorrow (Saturday) at Betta Ball Sports Shop in Joina City at a price of US$35 each.