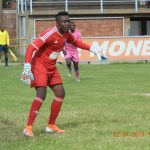 VETERAN goalkeeper Munyaradzi Diya is relishing the challenge posed by his colleagues in the goalkeeping department at the Glamour Boys and is keen to work hard and challenge for the number 1 jersey.

Competition for the number 1 jersey at DeMbare has heightened with the coming in of Taimon Mvula who is set to add competition between the sticks.

Simba Chinani was the regular goalkeeper at the Harare giants last season and is still around, for now.

Diya says he has a lot to offer having had stints with the Dynamos, How Mine and Highlanders.

The experienced goalminder believes through hard work, he can challenge for the number 1 jersey despite facing stiff competition from Mvula and Chinani, a scenario he says is healthy for the club.

”Obviously we have quality personnel between the posts and for me it is a challenge and that is what football is all about.

“I will just do my part in terms of contributing to the team and it is obviously good for the team knowing that they have quality players in the goalkeeping department”, said Diya.

Chinani is rated as one of the top goalkeepers in the country and usually provides regular service to the local-based national team.

Former Hwange goalminder Taimon Mvula is also highly rated having commanded the number one jersey at the coalminers for several years.

With Diya also available this leaves the Glamour Boys with a healthy situation between the posts.

There is a similiar scenario of competition in other positions after the club acquired several top players.

DYNAMOS FC goalkeepers’ coach Gift Muzadzi has challenged his trio of keepers to use the coronavirus lockdown period wisely as no-one is guaranteed a starting place when the league eventually gets underway.

For the upcoming season the Glamour Boys have an experienced set of goalkeepers who include Warriors fringe goalkeeper Simba Chinani, veteran Munyaradzi Diya and agile former Hwange gloveman Taimon Mvula.

“Usually, there is no two ways about the choice of the first-choice goalkeeper. The best performing player, or the one in top form at that particular time, gets the preference. That is where it is different with the selection of the rest of the infield players.

‘‘A coach can tamper around with positions and tactics to accommodate one trusted infield player but you cannot do that with the goalkeeper, it’s too risky.

“Apart from that, this is a very sensitive area. If the team loses the goalkeeper, as the last man in defence, is usually the first to get the scrutiny.

‘‘How did we concede when your job is to guard against letting in goals? These guys come under a serious spotlight all the time, sometimes justified and sometimes not,” said Muzadzi.

Chinani, who is the youngest at 24, has made the Dembare number one jersey his own in the last two seasons. This has seen the former Yadah Stars goalkeeper getting national team call-ups ahead of some established names.

His form also earned him a trial stint in Russia where he spent a month, earlier this year before returning home to extend his stay at Dembare.

Diya, who is the oldest of the three as he turns 35 this year, will be in his final year at the Glamour Boys and has everything to play for.

He boasts a strong resume, having played for the country’s Big Three — Dynamos, Highlanders and CAPS United.

However, he struggled to break into the starting line-up, on his return to the Glamour Boys last year, when he was in the shadows of Chinani.

He has spent most of his career at Hwange, a club famed for producing quality players, despite having its problems in failing to keep its Premiership status.

He joined Hwange in 2010, having started off with the juniors’ side, before being promoted to the senior team.

Muzadzi said the situation reminds him of his playing days at The Boys In Blue when he was in competition with Ernest Chirambadare and George Mandizvidza.

“Competition makes one a better goalkeeper. It helps you to be focused, confident and helps grow your career.

“You don’t have to be too comfortable because you are commanding the starting place.

“This reminds me of the good old days, the competition that we had with the likes of George Mandizvidza and Ernest Chirambadare. You would feel the pressure from Tuesday to Sunday because the team wants results.

The moment you slip up, someone else would step up to grab the opportunity with both hands and you would find it difficult to come back again.’’

Muzadzi has been several Warriors caps and also was part of the 2006 team that was in Egypt for the AFCON finals under the guidance of former coach Charles Mhlauri.