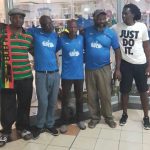 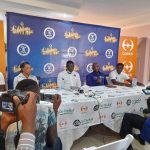 VARIOUS football personalities have congratulated Dynamos Football Club for the new kit partnership they unveiled with On The Ball Sports, through the LOOKS brand, at a glitzy function yesterday saying it is a milestone event in the history of the club and local football in general.

The country’s biggest and most successful club, announced yesterday they had signed a three-year kit sponsorship deal with a UK-based sports equipment and apparel manufacturer, On The Ball through their brand LOOKS.

Sportscaster Barry Manandi, who graced the occasion, tweeted his congratulations to the Glamour Boys; “Congratulations to Dynamos and OTB LOOKS for launching their new partnership! From this training shirt, plenty of reasons to be excited about the future for Chazunguza fans”

Fellow sportscaster Mike Madoda said the LOOKS brand is top quality. “The one thing I’ll say about about LOOKS Sportswear is that Dynamos are gonna be looking good, its top quality gear. It might be a relatively unknown brand, but their quality and some of the designs are right up there.”

Fellow PSL club Bulawayo Chiefs sent in a brief message, “Congratulations our brothers Dynamos FC on your kit sponsorship. We celebrate with you”

“I had a glimpse of the kits and the regalia they are getting. Haa vanenge vakachena boys dzangu. The official launch was professional. I see Dynamos going places with this kind of professionalism. Sure Mr Mupfurutsa has engaged the top professionalism gear.

“I see many more corporate partners coming in to join Dynamos. Remmington Gold are their principal partners and they have had a great relationship already thus far. LOOKS will bring the good looks to the partnership. I see my sister Yvonne Tendai has settled in well at the club,” said Bunjira.

Coach Tonderai Ndiraya says the coming in of such corporates will certainly make his job easier as his team aims to reclaim their lost glory.

“As members of the technical team, we are very excited by this kit sponsorship deal,’’ said Ndiraya. “We are grateful to the sponsors who have come on board.

“One most important aspect of looking good is that the players get to gain more confidence and that would even manifest in the field of play.”

“What is happening at Dynamos right now is something that we have to appreciate,’’ said Ndiraya.

“The developments show that more and more corporates are showing a great deal of confidence in Dynamos.

Dynamos patron, Webster Shamu hailed the Glamour Boys leadership for their efforts in taking the leading role in professionalising sport in the country.

“What has happened today is a reflection of the realities of what Dynamos Football Club is all about,’’ said Shamu.

“I think that today we have witnessed an event which is reflective of the fact that Dynamos have moved on to another level in terms of organisation and administration.

“It’s a reflection that Dynamos is not going backwards, we are moving forward.

“Apparently, we were affected by Covid-19 but we are determined to succeed and we have seen the efforts being put in place by the Dynamos football leadership headed by Bernard Lusengo-Marriot.

The first consignment of the team’s playing, and training equipment, is expected tomorrow while the replicas are set to arrive in the country in the next three weeks.