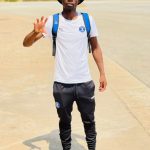 Former Dynamos midfielder Barnabas Mushunje has passed on. He was 24.

The Simba Bhora player lost his life after the car he was travelling in along the Harare-Shamva Road was involved in a collision with a tractor earlier this afternoon.

The badly-injured Mushunje was rushed to Parirenyatwa Hospital where he was pronounced dead on arrival.

The player had travelled to Mutare for a funeral and was on the way back to Sjhamva where his team Simba Bhora are based.

Mushunje joined Dynamos in January 2020 and did not play much due to the Covid pandemic.

He played in the Chibuku Supercup and a few league matches in 2021 before moving to Simba Bhora at the beginning of this year.

May His Dear Soul Rest In Peace.