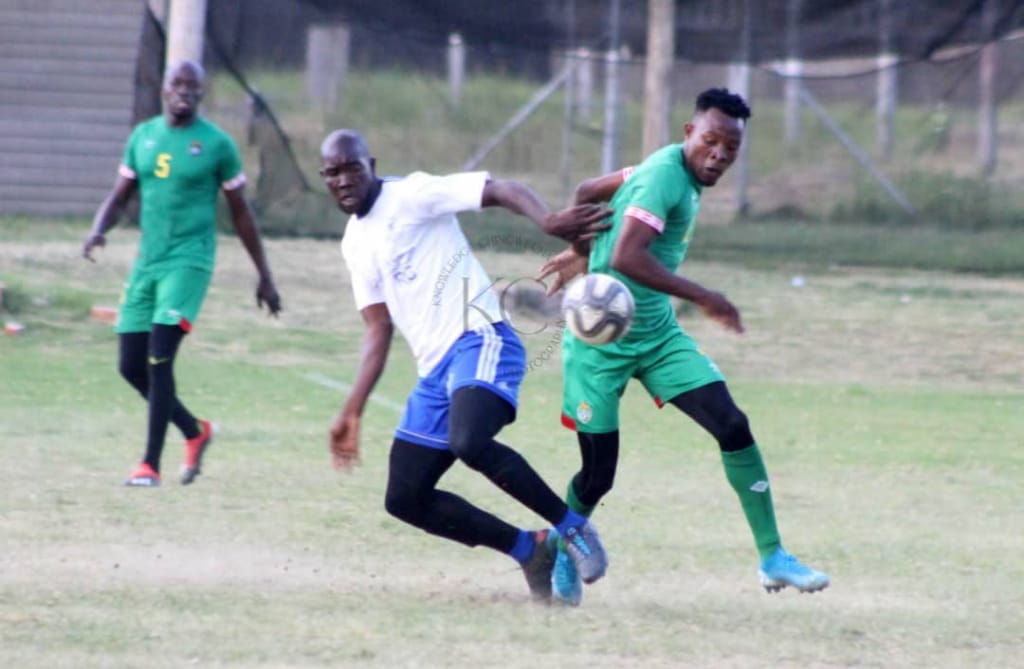 A PENALTY conversion was all that separated the Zimbabwe National Team from Dynamos FC in a friendly match played at Hellenics Sports Club yesterday.

(In the picture, Dynamos players Nkosi Mhlanga in blue and Juan Mutudza in green tussle for the ball in yesterday’s contest)

The home-based Warriors are currently in camp preparing for the Total African Nations Championships (CHAN) to be held in Cameroon from the 4th to the 25th of April 2020.

As part of their preparations, the Warriors visited Dembare at their training base and played a match which saw the former champions put up a commendable show despite playing without 3 key players, Partson Jaure, Juan Mutudza and King Nadolo who all featured for the National team in the match.

Despite that huge setback, the Glamour Boys went toe to toe with the cream of local football with coach Zdravko Logarusic visibly frustrated for long periods of the match.

The Warriors got their solitary goal through a penalty awarded after defender Byron Madzokere was adjudged to have upended Wellington Taderera in the penalty box.

Zimbabwe is in group A with hosts Cameroon, Mali & Burkina Faso and will kick off against the hosts on the 4th of April at 1600hrs.

Dynamos coach Tonderai Ndiraya will draw much satisfaction from yesterday’s performance as he bids to knit a strong team for the upcoming PSL season.