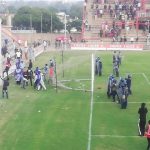 The Premier Soccer League Disciplinary Committee has found Dynamos guilty of causing the abandonment of their ill-fated league match against Highlanders played last month at Barbourfields Stadium in Bulawayo and fined them US$7500.

Highlanders have also been slapped with a US$5000 fine for their fans’ invasion of the pitch as they celebrated the disputed goal.

Additionally, the PSL have awarded the match to Highlanders on a three-nil score line.

The match was abandoned in the second minute of time added on when both sets of fans invaded the pitch at different intervals leaving the referee with no option but to abandon the match.

Highlanders’ striker Washington Navaya had headed the ball home sending multitudes of Bosso fans onto the pitch in wild celebrations.

This angered the Dembare fans on the Mpilo End Bay and they promptly stormed the pitch and tore the nets on one goal while some attempted to uproot the goalposts.

After police had briefly driven the fans away from the pitch, council workers brought in some replacement nets but they could not do anything as missiles rained onto the goal area as Dembare fans protested the awarding of the goal.

This left the match commissioner Edson Nkau with no option but to call off the match.

The latest judgement increases Highlanders’ points tally to 23 though they still remain on 10th position on the log. 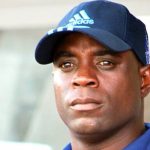 So Dynamos coach Tonderai Ndiraya was suspended last week for as yet unexplained reasons. Only to be reinstated four days later again with no word coming from his employers.

Naturally, the streets were abuzz with theories of the suspension with many alleging “Ndiraya’s stubbornness and insubordination, while as many claimed that Ndiraya ran a “Pay As You Play” scheme among his players.

But the most common of all was that Ndiraya had been suspended for poor results coupled brought about by “boring and unimaginative football.”

So far, Dynamos have played 16 matches, though one of these was abandoned. They have notched up nine victories and four draws, garnering a total of 31 points.

Which brought me to wonder how other Dynamos teams of the past 10 years have fared in their first 15 matches of the season, including the famed Dynamos sides of the golden Kallisto Pasuwa era between 2011 and 2014 which won the league titles in all these years.

Let us consider the mark of the first 15 matches because that is when the Dynamos executive had seen it fit to suspend Ndiraya.

A closer look at the last ten seasons will reveal Ndiraya’s 2022 class to be the SECOND top perfomers of all Dynamos teams in the first 15 matches of each of the past ten seasons.

Ndiraya’s performance is only bettered by the 2012 Dynamos team coached by Pasuwa which won 10 matches and drew 3 for a total of 33 points.

This 2022 Dynamos class has outperformed all other 8 Dynamos teams of the last 10 seasons including 3 of the famed Pasuwa teams of 2011, 2013 and 2014. Interestingly all these three Pasuwa teams went on to win the league title in each of these seasons.

The worst Dynamos of the past 10 seasons in the first 15 matches is the 2018 class coached by Lloyd Mutasa and assisted by the late Biggie Zuze which won just 3 matches and drew 5 for a total of a meagre 14 points. This poor start would cost Samaita his job in September of the same year as the Glamour Boys hovered dangerously around the relegation zone.

Lloyd Mablanyo Chigowe was to take over from Mutasa with six matches to play to the end of the season and had an average return of 2 wins, 2 draws and 2 losses, in the process managing to steer Dynamos clear of the axe. That decent run would earn him the Dembare job on a substantive basis at the beginning of the 2019 season.

Sadly, Chigowe would fail to replicate his magic wand as he was fired in April after losing 3 successive matches while winning just one match from the first 4 league matches. The Dembare executive decided to give the reigns once again to Tonderai Ndiraya. The two coaches put up a total of 5 victories and 5 draws for a total of just 20 points from the first 15 matches.

The Covid-19 pandemic struck at the beginning of the 2020 season halting all football matches for that season and part of the 2021 one.

David Mandigora’s class of 2015 managed 27 points from its first 15 matches, 3 shy of the current Ndiraya side.

The current Ndiraya side also perfomed better that Italian Paulo Jorge Silva’s Dynamos of 2016 which won 7 matches and drew 4 matches for a total of 25 points.

The current Ndiraya side even has the luxury of an outstanding match not yet credited to their statistics, that is the abandoned blockbuster tie against Highlanders at Barbourfields which is set to be decided in the boardroom. By precedence however, Dynamos are most likely going to lose the 3 points to highlanders but this will not affect their total number of points in the first 15 matches of the season.

So contrary to popular belief about poor results, Ndiraya’s Dynamos has actually done very well putting up the second best start to a season by Dynamos teams in the last 10 seasons.

**Match Abandoned And Yet To Be Decided