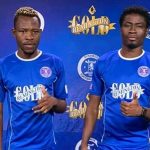 DYNAMOS Football Club have refuted widespread speculation that the kit (pictured) worn by players at their ongoing social responsibility programmes and training sessions is the official playing kit for the Harare giants.

The Premier Soccer League management recently revealed that the 2020 season is provisionally set to be played in a mini league “bubble” format.

The 21-time champions are ticking all the right boxes at a time when some financially struggling local clubs are feeling the full impact of the coronavirus pandemic.

But for the usually problem-ridden club, what was largely expected to be a tough year for them has in fact turned out to be a fairly smooth sail for the club, all thanks to principal sponsors Gold Leaf Tobacco.

The DeMbare boss clarified the matter, “Contrary to what most people think, the kit that was widely circulated on social media about two weeks ago is not the official kit that will be used by the team but it’s part of regalia that players will use during social responsibility initiatives.

“We are involved in so many social responsibility programmes in partnership with our sponsors RG-Gold Leaf Tobacco and our players must be identifiable when doing non-profit work in communities,” explained Mupfurutsa.

“The official kit will be unveiled in a few weeks.”

“Now that football has been given the green light to resume, we are forging ahead with plans to unveil a brand manufactured official kit that will be used in the mini league format that is being proposed by the PSL,” he said.

Turning to the DeMbare/ RG-Gold Leaf Tobacco partnership that has seen the club resemble a smooth sailing ship, Mupfurutsa said the club was in a good space and would continue to strive to improve the welfare of its players.

“We are in a good space, we can’t complain. Our sponsors have been very generous by making sure we navigate through these difficult times as our players are paid on time and did not have to worry about pay cuts when other clubs were struggling to keep afloat.

“We are in the first two years of a five-year deal and the relationship between the club and our sponsors keeps growing,” he added.