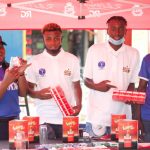 DYNAMOS Football Club fans will once again get an opportunity of meeting their favourite players when the Remington Gold Red Hot Promotion continues at various centres in Harare tomorrow (Saturday).

With football having been set aside following the onset of the Covid-19 pandemic, supporters will get to mingle with their favourite players away from the field.

Cameroonian import Albert Eonde and Barnabus Mushunje are the Glamour Boys players that will be at N.Richards Tynwald.

The Dynamos-Remington Gold Red Hot promotion has been running at N.Richards branches with fans getting photo opportunities with their DeMbare heroes.

Besides rubbing shoulders with their favourite players fans that purchase Remington Gold products will be handed over supporters’ jerseys as well as being entered into a grand draw where winners stand a chance of walking away with bicycles.

The third week of the Remington Gold Red Hot Promotion will come days before the Glamour Boys begin preparations for the PSL mini-league tournament which is set to be used to assess the viability of topflight football returning following months of being on the sidelines.